In addition to teaching, research and associated university administration, public engagement is an important part of my role as a researcher and educator—and also lots of fun!

As Dr Dave (my flannel shirt wearing, binocular-toting alter ego) I am the face of biodiversity education for the Murray Darling Basin Authority, presenting a series of short videos about biodiversity.

As a founding member of the Slopes to Summit partnership, one of the original regional hubs of the continental-scale Great Eastern Ranges Initiative, I’ve helped out with Bioblitzes and a range of field days and workshops. 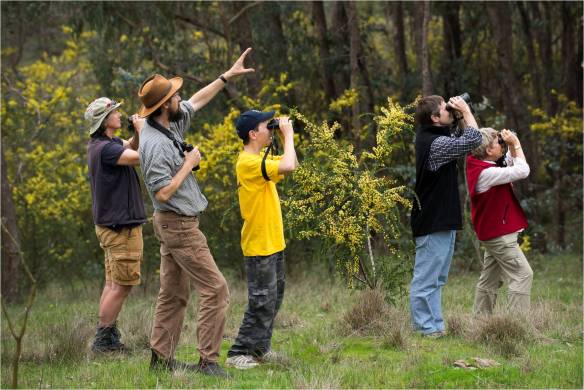 I give many talks–to school children, groups of people interested in birds or plants, scientific colleagues and also the general public.   I was featured in an Envirostory written by students at Thurgoona Public School: Dr Dave Enviro Legend.

As well as the dreaded powerpoint style presentation, I enjoy alternative formats such as PechaKucha–20 slides shown for 20 seconds each.  Here’s the transcipt of one of these I presented, entitled Eight truths

With funding support from the Bjarne K Dahl Trust, I acted as executive producer and presenter of a flim exploring our connection with Eucalypts.  Called Snow Gums to River Reds, the film showcases a diverse range of responses to the question: “What do you see when you see a gum tree?” featuring Eucalyptus species from Mount Kosciuszko to the Murray River around Albury, in New South Wales, Australia. The film has been produced by the Slopes2Summit (S2S) conservation partnership and Mosquito Productions and was completed in November 2012.

In late April 2014, I curated the realscientists twitter account, giving live updates from far north-western New South Wales.  As well as mistletoes, birds, fragmentation and species richness estimation, I reflected on research generally–what it is, and what it takes to be a researcher.  These snippets were collated into a series of four cohesive narratives by the talented Sciencesarah.  The first, available here introduces some of my mistletoe research and associated work on frugivorous birds.  The second one relates to habitat fragmentation and the trials and tribulations of conducting fieldwork in the tropics.  The third and final one relates to the nature of research itself, including reflections on achieiving work-life balance